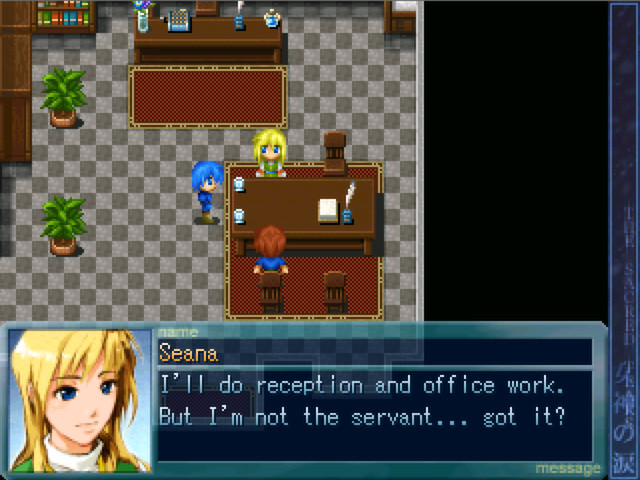 Sacred Tears TRUE is a doujin JRPG, a phrase that’s largely interchangeable with indie although sometimes attaches stronger connotations of passion and freedom. This is incredibly apparent playing through AlphaNuts premiere Steam title, it truly feels like a love letter to a generation where RPGs really found their stride. The aim was clearly to make a game the developers would love to play and to incorporate everything from the genre that makes it special. They succeed very well at the replication, only it comes with a few warts and tropes included.

You begin your adventure by joining your hero Seil and his companion in the middle of a heist gone wrong. It’s a welcome break from inhabiting an unassuming young adult, moments before his village is burned to the ground and vows revenge against the nefarious empire. That’s not to say you won’t recognise a lot of traditional set-ups from JRPGs, anime and manga but it’s refreshing enough in a typically conventional genre that you’ll let a few stereotypes pass. It helps that the characters are quite interesting, with emotional brooding teenagers replaced by charismatic and cheerful swindlers. It’s a small scale tale, taking place in a single city but its inhabitants are both memorable and likeable. 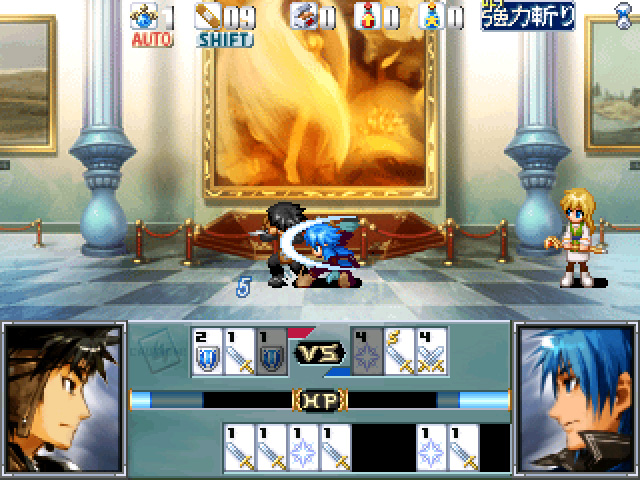 The game is broken down into small chunks and presented in an almost episodic fashion. It’s a pleasantly unusual change to the formula that enables the current segment of the story to be wrapped up at the end of each chapter while keeping an arching storyline to maintain interest throughout. In all honesty, you could quite easily ignore the unconventional segmentation and play it as a standard JRPG but it does help structure the story and offer easy points at which to save and take a break. I think we’ve all stopped playing a game only to come back to it a few weeks later and been completely lost to the events upon resuming.

What really sets Sacred Tears apart is also its strongest factor; the combat system. It’s difficult to describe efficiently but the strange alchemy of poker, rock-paper-scissors and Play Your Cards Right works remarkably well. You draw a hand of nine cards, each with their own combat options and a value, and your opponent is given a similar selection. You pick three each turn and they’re paired off against the enemy’s, with certain actions being stronger against others and the numbers deciding the final outcome. There are more subtle nuances such as potential hints towards the cards they’ve chosen and bluffs but the basics alone are enough to appreciate the labour that went into making an interesting and original system.

It takes some time to settle into the mechanics comfortably enough to become confident, and while the tutorials are efficient in teaching you the very basics of the structure, there could be a little more in the way advanced hints and thorough descriptions. Personally, I appreciate the lack of hand-holding, but it’s a divisive subject and there will be a few that will want to check the PDF manual for tips to the tougher battles. There’s a large element of luck to the combat which is bound to frustrate some, but it’s difficult to see how guaranteed rules could be implemented without becoming effortless. I hugely recommend trying the demo before purchasing to see which side of the fence you sit. Fortunately, one other contentious facet of JRPGs is largely eliminated and that is grinding. You’ll find the best means with which to increase your odds of success are within your own skills and methods rather than spending mindless hours trying to reach some arbitrary stat level.

Genoseed City is a beautiful place, rendered lovingly in pixelated prettiness. It could easily stand besides the games it replicates by creating faux-authentic hardware limits while simultaneously using those constraints to perfect a design close to many gamer’s hearts. Knowing that a game was made in RPGMaker typically puts me off, but the signs are much less apparent in this case. There’s a clear amount of effort put into creating unique menus, sprites and environments so its origin does little to dissuade me. It’s also got a pretty great soundtrack that’s catchy at times and dramatic when it needs to be. It’s not one I think I’d listen to outside of gaming; like Persona, Final Fantasy 8 or Disgaea, but it’s far superior to the typical JRPG on Steam.

There are some issues that became apparent over extended play, with my biggest gripe being the lack of options. As in, there’s no menu whatsoever. Control adjustments, resolution changes, sound levels and more are unavailable, at least through traditional means, and it’s a shame that such an obvious omission mars a pretty great whole product. The gameplay begins to flag in the latter third of the game slightly, with the greatness displayed in the first two thirds never really being expanded upon. It doesn’t derail an enjoyable and very charming JRPG in any real sense though, but it’s something I’d love to see worked on if, fingers crossed, a sequel is ever in the works.

My complaints mostly come from love, of wanting the game to achieve the heights its potential could have reached. Despite these hiccups, it’s still one of my favourite JRPGs on Steam and that’s not without lack of competition. At £6.99 you get huge value for money, with a 15+ hour adventure full of smart combat, an enjoyable story with plenty of character development and a hugely charming, beautiful design. It’s fantastic to see developers that very clearly respect their players and enjoy playing their games as much as making them. I’m all the more excited to see where they go from here.