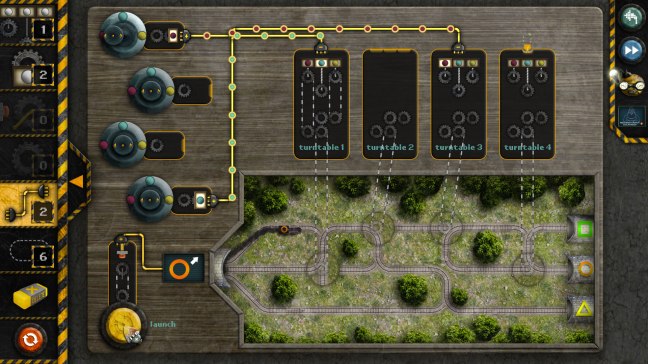 If SpaceChem is akin to making large-scale Rube Goldberg-esque constructions using Lego Technics, then Machineers is the Meccano of the engineering puzzle world. That’s not to say that the designs needing completion in this game are simple or best suited to children, but merely that they are far more serene and digestible than its evil brother. In truth, Lohika Games’ first Steam title bears little similarities with Zachtronics demonic offering, beyond the placing of mechanical parts but the comparison serves to indicate whether it might be of interest. If you’re craving a title that requires a similar frame of mind but removes the requirement of a phD and spades of patience then this might just be what you’re after.

The story begins with your first day of work at a repair shop in Tivolo Town, a rather sombre settlement set in what appears to be a post-apocalyptic sitcom where robots are all that are left in the world. The fate of humanity is never quite addressed and neither is the rather macabre fact that the workers are surrounded by piles of scrapped robots; essentially their own body parts. Regardless, there’s a generally cheery overtone to the whole game which is mirrored in the jovial speech of the several citizens you meet and aid throughout your journey. Despite the bleak outlook, barren lands and graffiti-strewn tin buildings, it somehow manages to be entirely lighthearted. If you ignore the aforementioned heaps of dead residents of course. 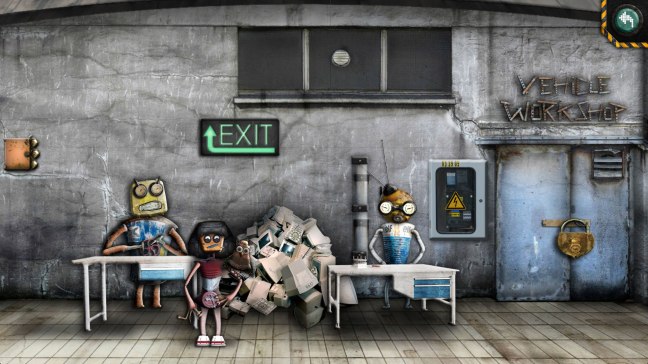 You’re introduced to the puzzles very gently in the opening moments. Initially, you’re simply required to place cogs to produce motion and connect belts to power distant elements. It’s not particularly challenging, but it is perfectly charming and avoids patronising tutorials and distracting tooltips. The third challenge introduces time-related mechanisms and it’s here that they begin to shine. It may only take a few trial and error attempts but they offer entirely different experiences from each other and very cleverly relate to the object that you are repairing. Even in the closing moments I didn’t find it overwhelmingly taxing, but the smart use of electronics and occasional Layton style puzzle were so well integrated that I just didn’t care.

The grainy film, muted colours and awkwardly tottering characters oddly reminds me of some of Peter Firmin’s animation work. As such, I find it very hard to criticise anything that reminds me of Ivor the Engine; it’s a wonderful tone and immediately aesthetically pleasing to all ages. The music is atmospheric, subtle and calming yet as noticeable as you would like it to be. Speech is represented by sweet chirps and Clangers-esque warbling. It immediately found a path into my heart and nestled amongst the children’s TV nostalgia and fondness for smelling videogame instructions, rooting itself firmly as a great example of how to be memorable to your senses without forcing dubstep and lens flares onto you. 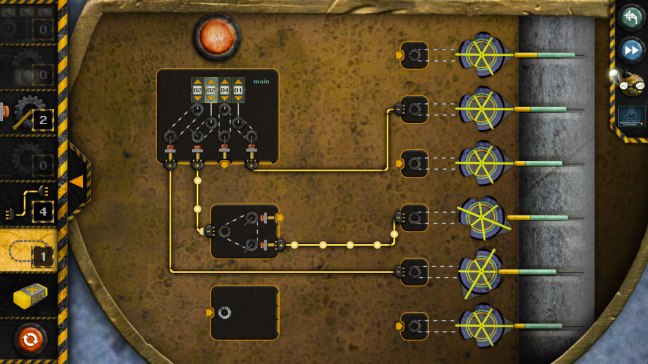 The biggest concern I have with recommending Machineers is its length, clocking in at a little over an hour for the first episode. It’s not quite a dealbreaker given that the adventure is memorable and the hidden achievements offer an element of replay value. Further episodes are planned, with the second already available and I thoroughly intend on finishing the collection to see the whole story. The puzzles continue to increase in complexity through the following chapter, so while the first slice is brief, the potential for mind-bending conundrums later on is very exciting.

It’s a lovingly made package that has a lot of room to grow and from the sound design to the delightful animations, everything about Machineers suggests it was a labour of love. If you equate value for money to the rate at which you smile whilst playing rather than a straightforward cost to hours ratio then I can only recommend it. There are very few games that take a genre known for stripped-down presentation and turn it into lovable and elegant illustrative gem. I only wish I could start it all over again with a clean memory, just to experience it once again.