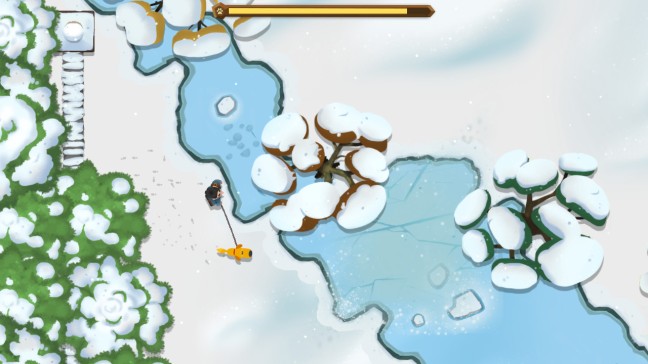 I’ve always felt a strange fascination for the concept of metal-detecting. There’s a romantic air to the idea that there’s a treasure trove beneath your feet just waiting to be unearthed. Inevitably though, the actual pursuit is less digging for gold and more cold, wet mornings with a haul of discarded junk. Loot Hound uses this juxtaposition heavily throughout the game, twining the mundane with the mystical in a sweet and whimsical manner.

In keeping with the lighthearted tone, your most valuable “tool” isn’t an instrument but rather the titular canine companion. Your buddy walks beside you and detects buried items once they’re within a certain radius, at which point they make a mad dash to fine point its location. All that remains after that is to avoid obstructing your dog as they sniff out the perfect digging spot and to catch the object the moment it shoots clear of the ground. This makes up the majority of the gameplay as you move from one treasure to the next until the park is exhausted of loot.

It’s essentially a single player co-operative experience without the nightmare-inducing escort missions. It’s a pretty convincing one too, with your pooch behaving in a strikingly dog-like manner. Pedestrians and joggers will distract them, heaped trash cans attract them like moths to a flame while fire hydrants cost you valuable seconds as they…well, I’m sure you can fill in those particular blanks. All the while, you need to manage your use of the leash; offer too much slack and you’ll lose your dog as they chase everything in sight while too little will risk the whole thing being pulled from your grasp. Chasing a pup and its trailing lead is both panic-inducing and hilarious at the same time.

Loot Hound is a largely casual experience, with very little in the way of hazards. Park patrol officers will end your current run if they catch you digging but by and large, the only obstacle in your way is the time limit. This simplicity ends up being one of its strongest features though as the joy of completing a set of items is unmatched by any other element. Even though you’re essentially doing the same thing over and over again, it feels exciting and fresh thanks to the enormous effort put into making the loot both humourous and creative. There’s a strong similarity to Deep Loot with its wide variety of booty and obsessive need to collect everything in sight.

Each object, whether new or duplicate, provides a sum of points used to increase the stats on one of three dogs. Each specialises in certain attributes with a unique core ability which requires that you use all three to find every single item. It works well in theory but ultimately only serves to artificially prolong the game as grinding is all but required for later levels. It’s fortunate then that the treasure hunting takes quite some time to be anything less than exciting, though a more natural progression would have been preferable. 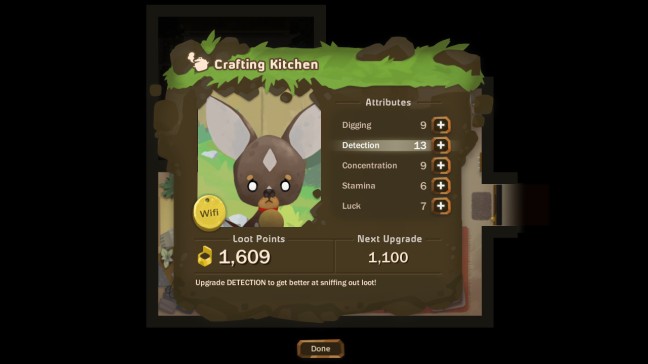 Aside from that, the remaining complaints are mere grumbles. Every now and then your dog will dig its heels in and refuse to budge, often at the most inopportune moments. It’s also not unusual for it to take the most indirect route to pinpoint a treasure which inevitably draws the attention of a warden. While I applaud Rhizome Games for including a certain level of realism, it’s questionable whether it creates as much personality as it does frustration. These minor complaints only really surface after a large number of hours and in light of a developer doing something undeniably unique, it’s not difficult to accept the odd imperfection.

The memorable mechanics and extraordinary charisma make Loot Hound such an easy recommendation. It settles perfectly between peaceful and exciting in a way that few casual experiences do and appeals far beyond that boundary. While it eventually loses a little of its shine in the final moments, the many hours before that are truly wonderful.