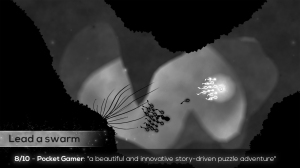 An unsettling breeze sways the inky black vegetation. An ethereal haze provides scant illumination, faint moonlight revealing a monochrome alien landscape. Overhead, almost blinding in its luminosity, a protozoa hovers. The mass, orbited by several minute tadpole-like entities, suddenly careers forward, bending the plant life in its wake. As it hurtles through labyrinthine passages, two lifeforms burst free from the undergrowth. Pure midnight in colour and leaving a trail of viscous darkness, they dart and flit about, maintaining a steady pace over their pursuer. Suddenly the path spits out into a cavernous chamber, the two evaders coalesce with a dozen others of their kind; much sharper, hungrier than their brethren. They gather and charge, hunting the hunter with blinding rage. Mere seconds before the two forces converge, a boulder slams between them, shielding them. The relief at the reprieve is palpable, and this is mere minutes after gameplay begins.

If you can forgive the prose, it’s indicative of the emotive aesthetics that Hero of Many uses that such words come easily to anyone that has experienced it. You are as very much enveloped in the alien world as much as the avatar you control. There’s no story, no lengthy plot explaining as to why you are here and what your goal is. It’s survival pure and simple, an archaic tale of light against darkness in its basest form; you destroy or you are destroyed. But it doesn’t feel barebones, it’s adrenaline sparking and stirring, a journey that is very difficult to remove yourself from until the very end.

Drawing upon elements of some of the greatest niche titles, such as Little King’s Story, Pikmin and Overlord, you are somewhat removed from the action. As you explore the exotic landscape, you’ll amass a force of light that accompanies you for the journey. Upon finding an opposing unit, your armada will immediately home in and destroy them; providing they outmatch them in strength of numbers or pure brute power. You can initiate a charge but largely the combat is automated, with an impressive AI handling your troops. There are moments of frustration when a unit is left behind, having clipped a wall and lost its way but it’s neither a huge hindrance nor a common occurrence.

As you navigate the gorgeous and threatening environments, you’ll encounter plenty of physics-driven puzzles. Initially as simple as pushing rocks out of the way, they sometimes require forethought and logic, a welcome break in both pace and genre. Thankfully, it gracefully strides past becoming a gimmicky puzzle/platformer the likes of which Steam already provides bountifully and instead remains a solid adventure that draws on apprehension and atmosphere to form a nightmarish yet stunning odyssey.

Whilst the mobile roots of Hero of Many shows in the brevity of the journey, it’s flawlessly adapted to the PC in regards to the controls. Simple mouse movement with quick clicks are all you will need and it works perfectly to keep you immersed in the game. Not demanding that you constrict your hands to keys or forcing you to watch where each finger lands grants you full focus on the gorgeous visuals, which, even after traversing platforms, manage to impress immediately with their Limbo-esque starkness. 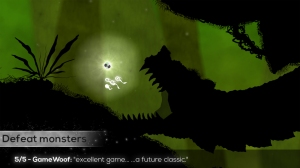 There are a handful of surprises that really impress thoughout Hero of Many, but with games that rely so heavily on exploration and discovery, it would be remiss of me to spoil some of that for you. Somehow, though, it manages to create an interesting cast without ever allowing them a single line of speech and evokes a spectrum of emotions without forcing it on you in a heavy-handed manner. If you played the criminally overlooked Undergarden and imagined what it would be like with a more cohesive gameplay structure then Hero of Many is the answer.

Cynical gaming may be en vogue but this is a massive breath of fresh air, a port that justifies its existence to the masses boldly and quickly.