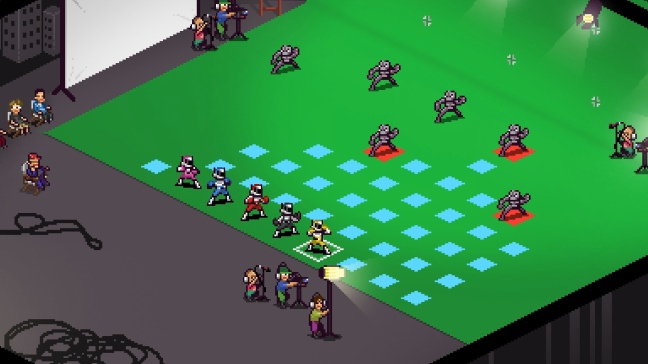 Behold Studios, the developer behind the fantastic Knights of Pen and Paper, have moved from an RPG about basement Dungeons & Dragons nights to an SRPG featuring a homemade super sentai TV show. It’s not a massive leap in premise or design but that’s not necessarily such a bad thing; KoPaP was a fantastic comedic RPG with enough depth to enjoy as a straight-forward game if humour isn’t what you’re seeking. While the visual design and menus are immediately familiar for players of the previous titles, I found Chroma Squad to be far and away the more enjoyable game; something I don’t say lightly.

The main meat of Chroma Squad’s gameplay comes in the form of grid-based tactical combat where you lead your five person (and the occasional beaver) troop against generally overwhelming odds. It plays out like most SRPGs would only fairly simplified. Streamlined is probably the more apt description though as you can easily find yourself tested, especially if you aim to complete the director’s requests that come in twos for every single scene. Each character has their own class with subsequent perks to choose from so there’s still plenty of strategy involved and the teamwork mechanics add a unique flavour with finishing moves and movement-extending throws. 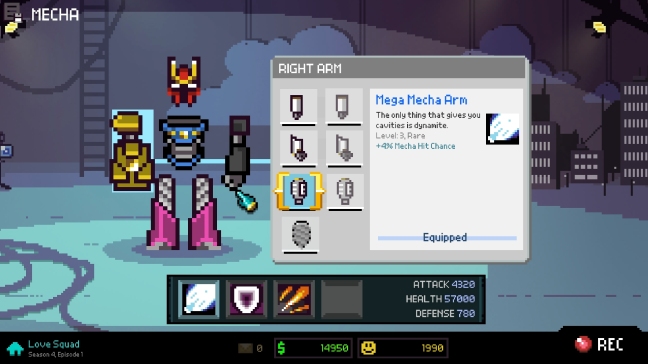 Like Knights of Pen and Paper, the simulation elements are quite light and serve as an outlet for cash to earn minor bonuses to certain stats. This isn’t a business management sim like Game Dev Tycoon and while there are some moments of behind-the-scenes finance fiddling, it’s more of a small taster between battles to break up the action than a full-blown hybridisation. However, there’s no shortage of options for customisation and you can quickly build up a studio almost as unique to you as one you’d built yourself. You can enter personal phrases to be called out during gameplay, choose your actors, their suit colours and names, not to mention all the visual elements that come with stats like studio upgrades and equipment.

Missions are varied affairs, with hostage situations, survival challenges and races against time thrown in to vary the typical back-and-forth fisticuffs. Early on, you unlock mecha missions which simulate Kaiju battles, these are mostly luck-based fights in the sense that you can keep up a combo as long as you want with the accuracy odds dropping with each successful hit. They can be frustrating but it offers a huge change from the basic battles and looks fantastic in action. It’s likely the fights will be divisive with players but they’re a great opportunity to see the huge robot you’ve been constructing from custom parts. At worst, they’re a blip in an otherwise fantastic product but I enjoyed them at every occasion.

I’m aware I’ve talked of the simplicity of the gameplay a fair bit and that it might put a lot of people off but it’s been done to remove the chaff and alleviate the grind. There’s still a wealth of stats to monitor, equipment to maintain and entire mechanics to indulge in should you so choose. The crafting adds an alternative to buying from shops with rarer and more effective items requiring that you deconstruct spare costume parts. Marketing options grant a huge range of bonuses upon finishing each episode and completed seasons create branches on the skill trees. It’s not a slow-paced tactical XCOM clone and it’s better off that way, instead it’s a unique amalgamation of the best parts of so many different games and genres. 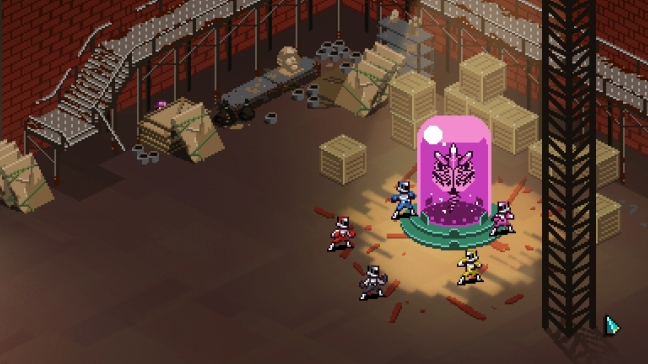 The most obvious trait of Chroma Squad though, is it’s humour. If you don’t appreciate games that take a tongue-in-cheek poke at their subject matter then you might be disappointed; but really, what else would you expect from a game starring a homebrew TV setup where the costumes are made from cardboard and sticky-back plastic? A lot of the storyline doesn’t really make that much sense, but again, neither did that of most live-action kid’s TV shows. The script is mostly fluff and it’s unlikely you’ll be playing through each episode out of plot intrigue, but that’s exactly what the stellar gameplay is there for. You’ll still get laughs aplenty playing through the campaign and a constant silly grin from all the pop culture references generously heaped on top.

I’ll admit my review comes from the perspective of someone that has never watched a single episode of Power Rangers or anything of its ilk. I know the references and tropes well enough to have understand every in-joke but I went into Chroma Squad excited due to the developer and genre more than the setting of the game itself. I mention it only as I believe that lovers of all things Mighty Morphin will go on to enjoy this even more than I did. With that considered, there should probably be a health warning on this for the most rabid fans.