I’ll admit I have a bad habit of squirreling away games I’m excited to play and will quite often never get round to playing them. These weekly summaries have meant I’ve played everything I’ve downloaded which has been great for me, so I guess I should thank you guys! It’s actually been a hefty task consolidating my favourites this week, I was surprised looking back how many enjoyable games launched.

The following games are picks from the week’s releases that I have enjoyed enough to recommend trying out; it’s not a comprehensive list and by no means suggests that missing titles aren’t worth playing either. If there’s something you’ve loved and I’ve not mentioned it then leave a comment. In no particular order, here are the games from the week starting on the 20th of October that I’ve enjoyed the most.

Miika is a gorgeous puzzler very much in the vein of Echochrome and Fez with the visual stylings of Ilomilo. It never quite reaches the levels of greatness the potential it possesses hints at but it’s incredibly charming and hugely impressive for a fledgling studio. Levels are broken into fragmented platforms which you must navigate by rotating the camera and making the path appear whole. The mechanic is familiar and enjoyable as ever though occasionally awkward when the seams are hard to detect but overall it’s a great buy for the price to support a talented dev.

Christopher Savory’s previous game, The Boy With Bombs, was a clever pixelly strategy game that was very reasonably priced and hugely replayable. It’s perhaps not a surprise then that Swap Heroes could be summed up in a similar manner. I greatly prefer this outing though with a heavier RPG element requiring you to position your party members to best face the oncoming foes. Each character has their own attack range and special abilities which combined with the leveling system that requires some tough decisions produces a unique, challenging and addictive little game.

Shmups tend to come in two flavours, bullet hell and arcade, whilst I tend to prefer the hectic action of Cave’s furiously tough shooters, it’s sometimes nice to explore the roots of the genre in games like Galaga and modern takes such as Hangeki. Super Mashteroids is, rather appropriately, a mash-up of Space Invaders and Asteroids. Not only do you have waves of fighters to contend with but also hundreds of meteors all at once. With particles, bullets, stars and ships filling the screen at once, it’s every bit as hectic as it sounds. 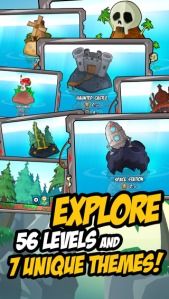 Splot has reportedly been in development for seven years, which is something that is surprising and revealing in equal measure when you start playing. For a game that was conceptualised in the early days of the platformer resurgence, it feels remarkably fresh – rather than the typical speed-running gameplay, your time-based opponent is physical. You race to complete stylish levels against a “ghost racer”-esque foe whilst picking up as many collectibles as possible. It may sound familiar but Splot’s long development cycle was obviously put to good use making the movement incredibly fluid, satisfying and intuitive resulting in one of my better purchases of the year. 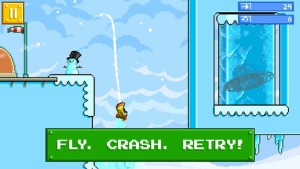 Retry is wonderful, truly representative of the amazing things Rovio and it’s talent scouts are capable of when let loose from the IP it’s most known for. Incredibly tough but satisfying in equal measure, you’re tasked with piloting an evidently damaged plane through delightful 16-bit environments. Requiring masterful use of the controls to feather your way along it also presents a great approach to the F2P dilemma most free games wrestle with. The checkpoints can only be used through the currency either collected or bought meaning a skillful player can bypass ever paying whilst others can spend a little to make it a more relaxing experience. I wouldn’t be surprised if Retry made it into my top 10 iOS games of the year which truly surprised me.

Puzzle to the Center of the Earth (by Foursaken Media) [Free, Universal]

I’m not a diehard fan of Foursaken unfortunately, but it’s in no way their fault – they design incredible games built from unique ideas, rewarding amounts of content and robust, bug-free coding. I think the reason is their specialising in genres I’m not hugely keen on such as Tower Defence and RTS. Well, Puzzle to the Center of the Earth changed everything for me with a smart and intricate match 3 platformer that never onces requires you to spend a penny. Mine your way Spelunky-style collecting formulas that produce special effects when certain matches are made and collect hidden treasure in an incredibly generous puzzler. 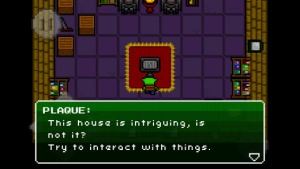 Black Tower Enigma is almost a mystery in itself; it’s a unique puzzler that’s as puzzling as a product as it is within the game. It’s a bit like taking The Room and trying to recreate it on the Mega Drive using the leftover designs from an RPG you were making. I love it for that alone, doing something so unusual that it’s almost jarring but it even manages to be intelligent and intriguing alongside that. Black Tower Enigma requires concentration, memory and imagination which is great to see and, whilst it may not appeal to all, deserves a place among the best iOS puzzlers.

Another great twin-stick shooter arrives so soon after Crimsonland HD, only the emphasis is on multiplayer thie time. A bit like Call of Duty’s Zombies mode, you and three allies face off against an increasingly strengthening horde until it’s defeated or you are. The leveling and loot acquisition is fairly generous considering the F2P nature of the game and nothing quite beats teaming up with real people; somewhat of a rarity on the platform. It’s intense, mindless and action-packed, a very easy recommendation to make.

Endless runners are very rarely paid products which instantly makes Chain Breaker a bit of a rarity. It’s also unusual in that it incorporates a Cut the Rope style mechanic into the running that sees you releasing bridges, creating slopes or sending enemies down abysses. It’s surprisingly enjoyable, if not world-changing and the shop feels a little freemium-ready but the freshness of the gameplay and the low price make it worth checking out. 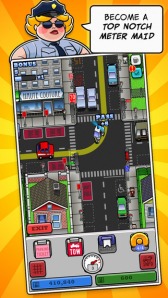 I can’t say I expected a Traffic Warden game to be any fun let alone something I’d recommend but there’s a charm to this along with some interesting gameplay. You race along Paperboy style, sometimes competing with other drivers, to put tickets on offending vehicles whilst maintaining your speed, avoiding traffic and keeping to the fastest driving line. It’s a lot more interesting than the premise would suggest and it’s handled with a remarkable layer of polish.

I’ve only recently started playing this so it’s somewhat of a rushed judgement but I’m really impressed with this. It’s an endless running highscorer with the usual control over your avatar’s jumping but you can also flip the world to negotiate the tougher obstacles. It’s incredibly polished and it looks great, the animation and fidelity of the graphics are top-notch. For free, I can’t find much to fault it.